The detour ratio of this kind of service is 1:1 making it attractive to potential passengers but usually expensive and increasingly complex. With a increase of destinations serviced, managing to fill a transportation vehicles to it’s capacity becomes increasingly difficult, resulting that most Direct Networks have either three to a maximum of five destinations or have vehicles with a small passenger capacity and flexible schedules and routes.
The simplification of a Direct Network so that every single station save 1 (N) is connected to one central station (Hub) via by a route (R) (Spoke) which has only one route segment (RS) is known as a Hub and Spoke Network.

An obvious example of a Direct Network is a taxi service. The possible number of routes exponentially increases but the ride frequency is so low that the actual number of route segments (RS) traversed with passengers and empty to next pick up point is similar to the number of destinations.

This type of Direct Network could be on-demand microtransit service. The vehicle would have a low capacity of 4 to 10 seats and only service a limited set of stations (N).  Such a service would is easier in this day and age to accomplish, because through mobile apps the ordering of a transportation is much more efficient then via telephone. There are however many examples of this type of decade long established service where a passenger can hailing a ride via hand signal. The reduced number of stations (N) helps this type of hand signal ordering. A driver of vehicle with a 6 passenger capacity that is occupied by 4 passengers could chose to pick up a further passenger if they saw their hand signal or if it was hailed and accepted the order, and adapt the route for an added destination.  The possible route segments (RS) that can be traversed is still large but greatly simplified compared to a On-Demand Direct Network.

A third generation bicycle sharing system with docking stations is a On-Demand Direct Network with Limited Destinations. The limited destinations are in this case the docking stations of the system. From the previous article discussing Linear Networks, the Medellín EnCicla bicycle sharing system was explained. Founded by group of university students in 2011 it originally bicycles were available at 6 staffed stations. The network has since been expanded to include 19 staffed and 32 automatic with plans to introduce service in Bello in the North and La Estrella, Itagüí, Envigado and Sabaneta in the south. 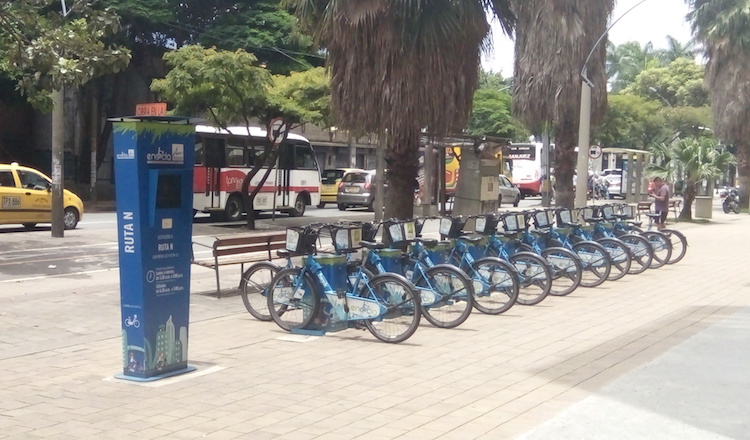 By further reducing the possible route segments by assigning a general direction or start and end point of a service, a On-Demand Direct Network Limited Destinations can reduce possible route segments (RS), and may reduce detours for some passengers. An example of a On-Demand with Flexible Routes Network is a bus service that can leave it’s assigned route within a short distance, to drop off or pick up passengers. A regular journey from start to finish of such a route could take 25 minutes but the time spent might be increased be 5 minutes by the addition of two small detours.

If you ignore the other transportation methods in Medellín, you can see the Medellín’s fleet of mini buses (Colectivo) as a On-Demand with Flexible Routes Network. Many of the decade old systems do in fact supplement a primary transportation network, for example those services in Kiev, Sochi, or Moscow. This type of network can be one option of providing a town an efficient, cost effective and flexible public transportation system by operating several bus lines Flexible Routes.

This type of service has also developed out of private entrepreneurship as in Medellín. The services there originate from a period of private enterprise when the tram network had closed, the city expanded rapidly and government was incapable of providing decent service. All that was needed for an entrepreneur was minibus that could carry 6 to 12 passengers from their place of lodging to work or other interest and the permission from the organisations in charge of along the routes.

Gradually these services have been standardised. A common fair per ride introduced, the routes and areas serviced defined, as well as safety standards and vehicle maintenance implemented. Some of these services have a low seat capacity and some buses approach the capacity and regularity of a regular bus service. In Medellín some are branded with Metro colours (white, yellow and green) but others can be very colourful.

Another example for a Direct Network would be a small airline service or a point-to-point shuttle bus service from, a lets say a university. If this university bus network would provide transportation services between three spread out locations (N=3), the lecture halls, the dormitories and the sports facilities then it would be necessary to have three two way bus routes, dormitories⇔lecture halls,  dormitories⇔sports facilities and lecture halls⇔sports facilities. If the university were to decide to add a destination, for example the local town centre, then the route number would increase to 6, by 5 destinations there would be 10 routes, 6 destinations there would be 15 routes,  10 destinations would result in a mind boggling complex and for a bus network inefficient 45 two way bus routes. This type of network will quickly become un-practical and usually examples are further developed into other types of networks with multiple destination en route.

See an example of university shuttle bus service that has develped further, the UofUBus.

This type of Direct Network can also be classified as Polar Network. A classic example of such a network is a Airline company that operates a hub and spoke model.  An airline will fly routes to a central station (airport) and coordinate them so that they arrive at roughly the same time. Then with transfer times the air planes with will depart again to their respective destinations enabling a wide choice of destinations for passengers with only one transfer necessary.

The Polokwana International Airport service as a central hub of Limpopo air travel, with many tourist flying from there to various safari tours in the province.