Before railways revolutionized passenger travel, there was the post coach (see previous post The first international public transportation network). Today you can book a historic post coach ride over the Gotthard, there they advertise it as a “unique and exclusive pleasure, an unforgettable experience”. Post coach travel was far from an exclusive pleasure, maybe unforgettable. Cobbled stone roads were rare; often roads consisted of mud, littered with ruts, puddles and pot holes. It took decades (centuries) to upgrade them to gravel roads that allowed the coaches to reach a similar speed as a horse rider. Travelling by coach meant hours of bumps and jolts, which allowed you little rest.

In regular intervals you could easy your bones for awhile at a post half station during a horse change.

Horse change at an Italian post station by Heinrich Bürkel

Quarter, half and full post stations were set up along post routes, either directly by the postal service or by contract with a local. Horse changes, carriage changes, carriage repairs, meals and passenger lodging, road construction and improvement, a huge logistical operation surrounded this network. But it was still cheaper than owning or hiring your own coach to travel.

At many post addresses not even a stop was included. The coacher would blow into his post horn at the beginning of the village alerting the postmaster (read; inn keeper, farmer, shop owner) that the post coach was coming. Driving past, the postmaster would through a bundle of post up to the coacher and have a bundle thrown down with letters for the village and surrounding villages.

Gradually coach travel speeds increased, from 2 to 3 kilometres per hour in the 17 hundreds to 6 in the 1830s and 10 km/h in the 1850s. This was mainly due to road improvements. Inspired by mining railways, the first overland railways were iron sheathed wooden rails that could also be seen as a form of road improvement.

Opening of the Horse drawn train Budweis-Linz in 1832

The horse drawn train Budweis to Linz, built from 1927, reached speeds of 12 to 15 km/h. This 128km trip took only one day, leaving 5am and arriving 7pm, including a lunch break at a restaurant midway. Carriages “glided” smoothly over the rails, almost like a sailing ship on calm seas, absolute luxury compared to the boneshaker post coaches. By the time the first horse drawn railways were under construction on the mainland Europe, in England the first steam powered engines were built to replace horses. They were faster starting at 16 to 19 km/h but were a complicated new technology, prone to break and need repair.

Satirical lithograph of a Adler locomotion being overtaken by a post coach in the background, Deutsche Bundespost ,1835.

By the 1850s tables had turned and the steam powered railways had advanced to reach speeds of 35 km/h, roughly 10 times the speed of post coach 40 years earlier.

By 1910 trains reached the speeds of 90 km/h leaving post coaches to fill the secondary spot but soon to be replaced by motorized buses.

A steam engine saluting its predecessor. by Deutsche Reichsbahn Gesellschaft 1927

Today the ICE and the TGV can operate at 320 km/h roughly 100 times the speed of post coach turn of the 19th century. 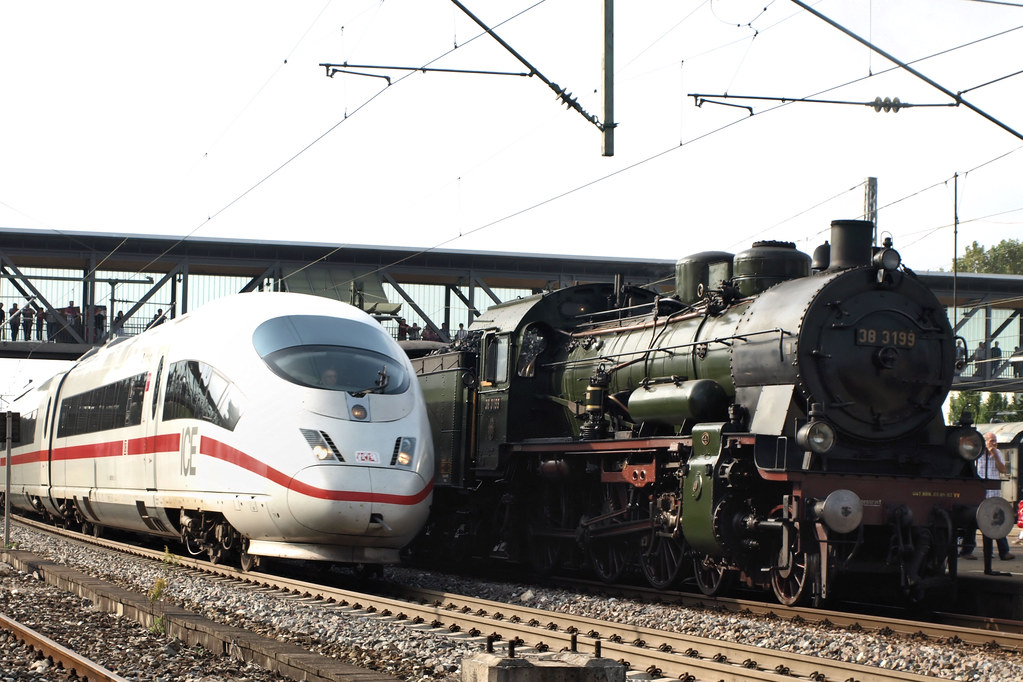 For those who want to get the feel of a post coach, apart from over the Gotthard you can also in Saxony and here, North Rhine-Westphalia, Brandenburg, Upper-Austria, Switzerland over the Schwägalp.