How to get to the grey areas?

Recently the question was asked, about the isochrone map Austria-Hungary, how to reach the grey areas in Dalmatia and Bosnia. If a person wished to travel to Split how would he or she get there? Before the advent of trains in Europe (and parallel to) there was actually a public transportation network that spanned large swaths of Europe, the post coaches (or stagecoaches).

After the decline of the Roman Empire, the government run Cursus Publicus postal system fell apart in the west and was later dismantled and abandoned in the east, leaving Europe with only messengers for international communication. Apart from sailing merchants that carried letters from one port to another, for about a thousand years if a king, bishop, duke, families or business wanted to send a message, they would have to hire or employ a foot or mounted messenger. Messengers carried a letter to its destination, maybe waiting for a reply to be written before riding back, an incredibly expensive form of communication. Compare it to the cost to employing a rider for say two days, or a week, pay for horse and lodging merely to deliver a letter, no wonder trade and the spread of ideas were hampered.

With the increase of international trade some regular post rider routes emerged, an early example is attested to before the official founding of the Hanseatic League connecting the main towns in 1274, other routes were set up by Saxony and the Swabian League. In England Henry I established a rudimentary messenger service in the 12th century, solely reserved for state affairs. It was further developed leading to the founding of the Royal Mail in 1516. The French nobles and the king maintained foot and mounted messengers for communication from 12th century. In 1464 a national system of postal services with predetermined routes and 234 post riders which connected the main towns of France was decreed. Russia, Turkey and Poland’s postal service developed similarly, and the church had a rudimentary irregular postal service that advanced over time.

The house Taxis (later Thurn and Taxis and this where the word Taxi comes from) rose from the 12 th century to prominence operating the major European postal service, spreading from Lombardy, Republic of Venice, providing postal services for the Pope, the Habsburg lands in the Holy Roman empire, the Low Counties, France, Spain and Portugal.

A sketch map showing the Thurn and Taxis long distance postal network for 1563 drawn by Joseph Rübsam at a later date.

The private Thurn and Taxis postal service existed in different forms until 1867 when its headquarters in Frankfurt were occupied by Prussian troops and subsequently it was sold to Prussia / the newly founded German Empire.

From foot, to mounted, to coach and carriage, to omnibus. How did passengers hitch a ride?

Letters can be carried by foot and mounted messengers, but larger and bulkier post becomes a nuisance. 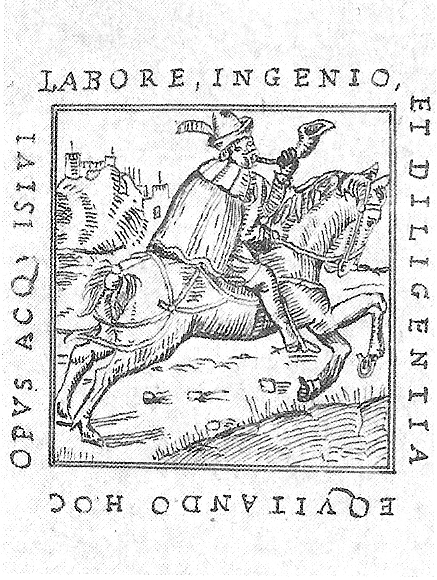 Thus some of the routes were also operated with horse drawn tilburies. These could transport packages. 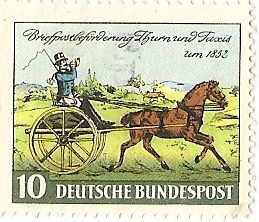 Since payments (silver and gold) were processed by post, they made a vulnerable target for highway men. A guard was the next addition, in England equipped with a blunderbuss that shot a round in the general direction of the bandits. For space, the two wheeled tilbury was upgraded to four wheeled coaches, which could also transport a third or fourth person.

A public transportation was born! This allowed, those who had the money, to travel from one town to another, visit family, enroll in a school, secure a business deal. The coaches had suspension added and these new more comfortable coaches where called carriages. Eventually the passenger service became so profitable that larger carriages were built, named Omnibus, Latin for “for all”.

The postal coach existed parallel to the growing train network and were gradually replaced but in many countries the post coach lives on in the form of the post bus.